I mulled over it for a long time on my vacation, and decided that the greatest game which was ever created was Konami’s “Legend of the Mystical Ninja” for the Super Nintendo.

Those who know me in person, know that I brood long and hard about creating art, about tackling some sort of creative project, and then nothing ever comes of it. Is it that I procrastinate on my “non-essential” artistic projects? Probably; especially when school work is due. Is it that I tackle too many projects, and finish none of them? Yes, there’s certainly that as well. Is it that I’m listless and lazy, and use my unfinished projects as a shield to hide the world from my obvious charlatanism, and lack of talent?

Well, as I sit here on vacation in Florida, and I’ve finally had enough of sun tanning and swimming–it’s cloudy and windy today anyhow–I think of all the creative projects that I’ve undertaken, and try to parse a greater meaning out of art. Video games are art, as well. The difficulty in creating any art, in my mind, is to find something that you want to convey–the meat of the message–and to find a proper form to wrap it around. Getting both of these at the same time is no small task.

What does this have to do with Mystical Ninja?

Well, I think that if I ever want to create passable art or good art, it behooves me to figure out what sort of art I like, and why I like it: 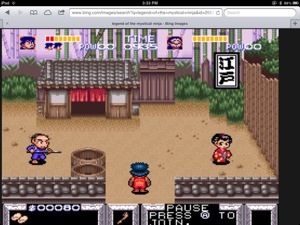 I’m not going to deny that some of this is nostalgia for the days when I was 7 years old and the centre of my existence was the Super Nintendo. But only some. It’s no more illegitimate than those old guys of a certain persuasion blasting their old metal albums from the 70s and 80s, and saying–without a shred of sarcasm or irony–that theirs was the greatest music of all time.

The Legend of the Mystical Ninja was the perfect game. It was a platformer based on medieval Japanese folklore, where you allied with a group of shapeshifting ninja cats to save a princess from a group of island hopping bandidos. And really, isn’t it always a princess? The animation was lively, the sound track is still stuck in my head to this very day, and the game play was fun. You could finish it in a single sitting if you had 3 hours to kill on a Saturday.

Much like an old black and white film, the supposed “technical deficiencies” of the SNES didn’t render this game any less enjoyable, or any less captivating a tale of adventure and journey. Gone With the Wind wouldn’t have been a better film with 5.1 surround sound, or 3D film. Nor would this game be better had it been designed with motion sensors or with full HD compatibility.

So what is it about this game? As best I can tell, The Legend of the Mystical Ninja represents a dying breed in two aspects: the Action-Adventure Platformer, and the Medium Story.

The first one is clear enough. It seemed since the days of the PS2 that no one wanted to have a screen hopping platformer anymore. It’s been eclipsed and marginalized by the first person shooter and the RPG. I can’t play any of the Call of Duty games where I’m a floating rifle doing target practice, because they’re obscenely boring and stupid. That’s not an opinion, that’s an objective fact.

And I can’t play any of the heady RPG games, because I find the plots to them God awful, and even when they are palatable, these are the types of games that require you to devote days, weeks, months to get your full value of satisfaction out of. Sure, in grade 7 I could devote the better part of a semester to Final Fantasy VII; that’s just not practical anymore.

Nintendo still makes platformers, thanks to its long running Mario franchise. And the linear structure of a game like “Uncharted” still fits into this vaguely defined genre that I’ve created (also, the zelda franchise, even though it’s not technically a platformer; maybe pokemon, too). But genres be damned.

What I’m more concerned about is the death of the Medium story. The Novella, the operetta. The light tale that I can lick off in a 150 pages, in 90 minutes of cinema. That’s what the Mystical Ninja was.

It didn’t attempt to be high art, and snob around a 40 hour soundtrack by Nobo Uemitsu, with a plot heavier than a Tolstoy novel. But it also wasn’t to the banal level of, say, a Fruit Ninja, or an angry birds. There was something there. You knew you were going somewhere, there was a sense of progress and purpose in taking a journey, and you were curious how it was going to end (even if you really knew how it was going to end). Platformers on touch screen devices (like Infestor from Ravenous games), are ok to play, and even decent to control on a phone or iPod, but you never feel like you’re being told a story. These are banal ways to keep your fingers busy when there’s nothing on TV.

I beat Legend of Zelda: The minnish cap for the GBA last month. Before that, Pokemon all the way back in grade 7 was probably the last game to truly absorb me with its story, and make me want to keep trucking forward and play it. It wasn’t too busy, and you travelled to different towns and different locations, but it was linear enough that you didn’t feel like you needed to defer writing your master’s thesis to make serious headways in the game.

I’m hoping to find a game for the 3DS that hits all of these marks for me. Something that’s entertaining and engaging, but not to the point of overwhelming me, or worse, boring me. I don’t want a 40-hour RPG epic. There’s the inevitable control issues that comes with a phone game or an iPad game, but that’s not for me to worry about. Get those kinks out of the way, and then come up with a good story. Better still, come up with a good story that lets me forgive how sucky the controls are, and we’ll be good!

(Hey look, I did finish something!)